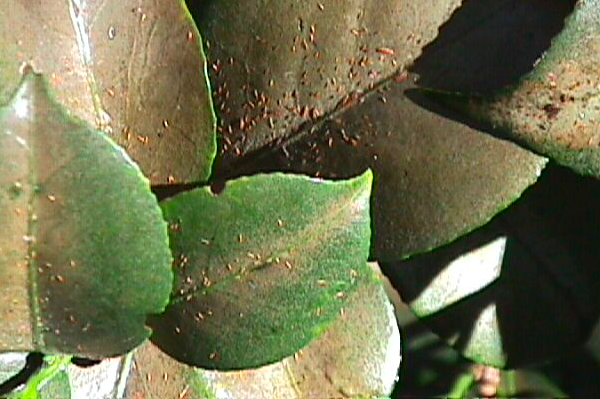 These tiny sucking pests can quickly wreak-havoc on indoor and outdoor gardens.

Many species of the spider mite (family: Tetranychidae), so common in North America, attack both indoor and outdoor plants. They can be especially destructive in greenhouses.

Spider mites are not true insects, but are classed as a type of arachnid, relatives of spiders, ticks and scorpions. Adults are reddish brown or pale in color, oval-shaped and very small (1/50 inch long) – about the size of the period at the end of this sentence. Immature stages resemble the adults except only smaller.

Mites live in colonies, mostly on the underside of leaves, and feed by piercing leaf tissue and sucking up the plant fluids. Feeding marks show up as light dots on the leaves. As feeding continues, the leaves turn yellow and may dry up and drop off.

Spider mites are most common in hot, dry conditions, especially where their natural enemies have been killed off by insecticide use. Some of the many species common in North America are predators of the plant-feeding mites, which make up the vast majority. They are also very prolific, which is why heavy infestations often build up unnoticed before plants begin to show damage.

Large populations are often accompanied by fine webbing. Host plants are many and include strawberries, melons, beans, tomatoes, eggplant, ornamental flowers, trees and most houseplants.

LIFE CYCLE– Most mite species overwinter as eggs on the leaves and bark of host plants. In early spring, as temperatures warm, tiny six-legged larvae begin hatching and feed for a few days before seeking shelter where they molt into the first nymphal stage. Nymphs have eight-legs and pass through two more molts before becoming mature adults.

After mating, females continuously produce as many as 300 eggs over a couple of weeks. Hot, dry weather favors rapid development of these pests. During such conditions the time it takes to pass from egg to adult may occur in as little as 5 days. There are several overlapping generations per year.

Note: Spider mites are wind surfers. They disperse over wide areas riding their webbing on the breezes. Careful containment and disposal of infested plants is crucial.

DAMAGE– Spider mites, almost too small to be seen, pass into our gardens without notice. No matter how few, each survives by sucking material from plant cells. Large infestations cause visible damage. Leaves first show patterns of tiny spots or stipplings. They may change color, curl and fall off. The mites activity is visible in the tight webs that are formed under leaves and along stems.

TREATMENT– Spray infected plants with an insecticide such as Spinosad, Montery BT, Horticultural Oils or Systemic Insecticide. Insure complete coverage of the leaves and stems. Spray two to three times with a week in between sprays. Always spray before 7 or after 7.