Plant of the Week: Bird of Paradise

The Bird of Paradise is semi-tropical so when they are smaller it is advisable to protect them from cold temperatures.

There are two very popular varieties of Bird of Paradise common to this area:

The first is Orange Bird of Paradise (Strelitzia reginae) which is known for its striking orange and purple “bird shaped” flowers. The flowers appear among medium sized green leaves and give the appearance of a bird in flight in the foliage. This variety can grow to a 5’ high and wide clump so allow room. 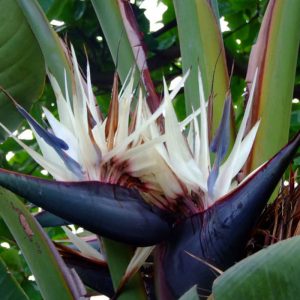 The second is the White Bird of Paradise (Strelitzia Nicolai) which grows to a significant height. It can grow to 20-30 feet tall with a spread of up to 10 feet. The 5’ leaves are what makes the plant’s tropical look and the “white birds” are tucked in among the foliage. Definitely make sure you have the space to put this plant.

There are some other varieties of Birds of Paradise that are less commonly seen such as a Yellow Bird of Paradise and some that people call “false bird of paradise” which is actually a plant called Heliconia.