Plants of the Month: Azaleas 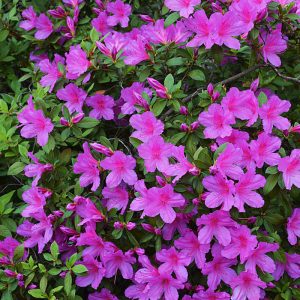 AZALEAS! In this part of Florida there are a couple of varieties of azaleas that perform beautifully! The Formosa azaleas are a variety that generally grows 4-6 feet high and 4’ wide. They have larger foliage and the flowers are strikingly showy when they bloom- generally late January to March.

The second variety of azalea is smaller growing and tends to be repeat bloomers wherein they bloom generally spring and fall. 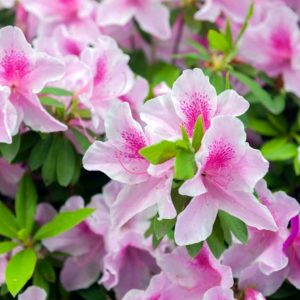 Lavender, Red and Gerbing White and George Taber Formosa azaleas put on a spectacular show in spring for about 6 weeks. George Taber Azaleas are a soft pink flower with a dark pink throat. Lavender is a solid lavender pink color, red is a solid magenta color and Gerbing is a solid white color.

Plant these azaleas in well drained soil, with shady to dappled light areas or against east walls and these plants are outstanding performers. This cold hardy evergreen is worthy of any garden. Incorporate potting soil and peat in the planting hole. After spring bloom, apply slow release acid fertilizer and lighter applications in June and August. As the plant puts on new growth and begins to harden, pinch off the tip ends and you’ll have 3 times as many flowers next spring! After August do not trim or fertilize to ensure lots of blooms next spring. Formosa azaleas are moderately salt tolerant and generally are deer resistant. 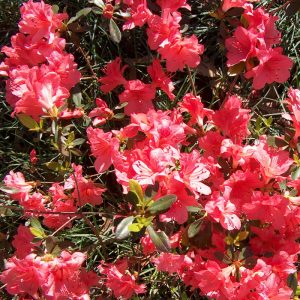 This semi-dwarf is one of the best performing azaleas for our area! It is a compact grower (3’-4’ high and 3 feed wide) that blooms sporadically all year but come spring this azalea is over loaded with flowers! It makes an excellent hedge, massed around trees, as a foundation plant on northern or eastern walls, or in small groupings for a pop of color. Incorporate potting soil in the hole when planting. Fertilize with slow release acid fertilizer after the heavy spring bloom and follow with lighter applications July and September. Prune or hedge after heavy spring bloom through the month of August. Fashion Azaleas are moderately salt tolerant and are generally deer resistant. 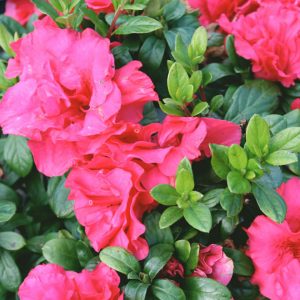 This semi-dwarf Kurume variety is a winner for the garden! It tolerates a little more sun and has a dense-compact growing habit. Pretty red flowers appear occasionally throughout the year, but, it blooms most profusely in the spring!