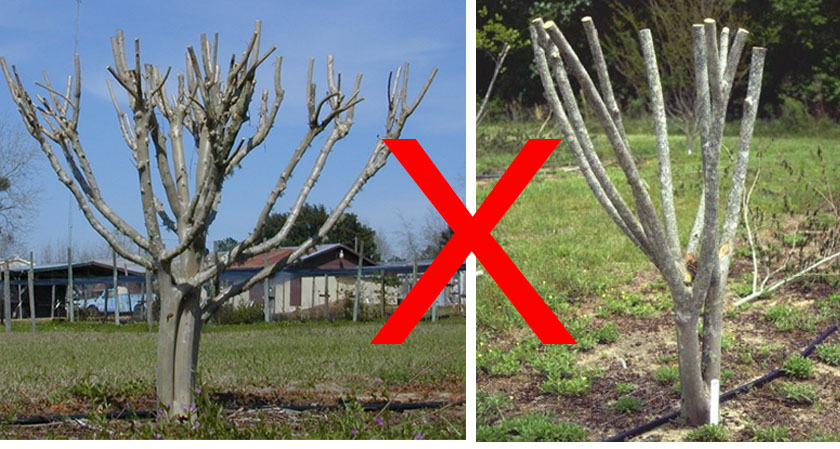 Properly placed Crape Myrtles are a low-maintenance tree that requires little or no pruning. However, reasons for pruning crape myrtles can be to improve plant structure –in other words the shape and appearance. Lower limbs are sometimes removed to allow clearance for walkways, structures or roadways as well.

Topping crape myrtles delay flowering for up to one month compared to unpruned crape myrtles. With some types of crape myrtles- the greatest amount of flowers occurs on unpruned trees. The number of flowers decreases in direct relation to the severity of the pruning. Topping or hard pruning may also increase the amount of maintenance for the trees as it results in far more sprouts or suckers. Topping also results in large areas of exposed wood that allows access to insects and wood rotting organisms that can weaken the tree not to mention the unsightly gnarls on the stems.

Tip pruning to remove seed pods is a personal choice. The presence of seed pods on your tree right now will not affect flowering in the spring. Wind and rain will eventually knock them all off.

If pruning is deemed necessary- use the following guidelines:

• Prune for safety- weak branches or visibility-any time
• Prune to improve structure or alter shape and occurrence should be done when plants are dormant-late February. Pruning too early might stimulate new growth that could be damaged by low temperatures.
• Prune to remove crossing or rubbing branches
• Prune to remove dead, damaged or diseased branches.

*To read more on this topic see the following article at https://edis.ifas.ufl.edu/ep399

Click here to view Crape Myrtles in our Library!